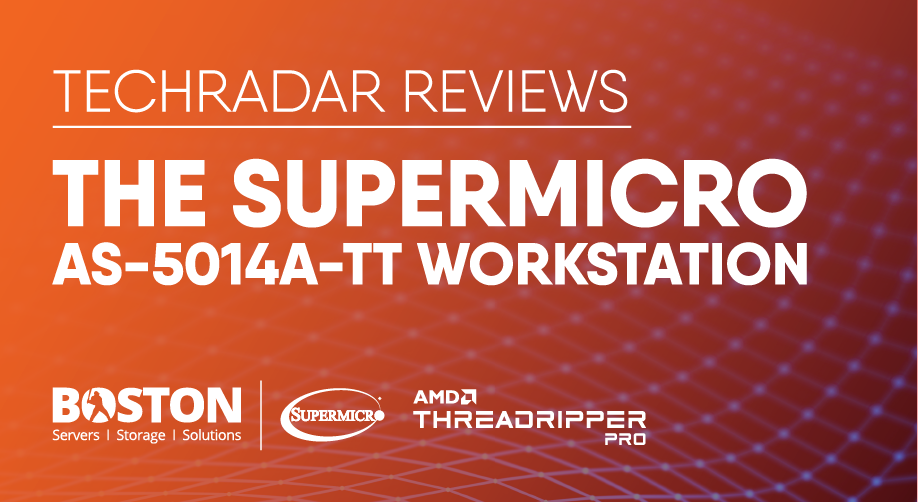 The term ‘workstation’ is an often-abused label for computers that are marginally better than run-of-the-mill desktop solutions.

Historically those considered critical workers often got given Workstation class systems, the logic being that they had a high hourly rate, so anything to speed these people up was a solid investment.

Where this strategy failed was that much of this hardware didn’t deserve a Workstation description in the classic Sun Microsystems ‘Pizza box’ Unix Workstations origins. They were merely high specification PCs, but with a few more expansion options and a correspondingly hefty price tag.

Conversely, the Supermicro AS-5014A-TT Workstation by Boston Limited in this review earns the label of Workstation. We’re talking all a guns-blazing Workstation built with parts explicitly designed for high-performance systems that aren’t generally found in standard computers.

And, yes, it costs plenty, but the performance on offer here dwarfs most desktop PCs by orders of magnitude. 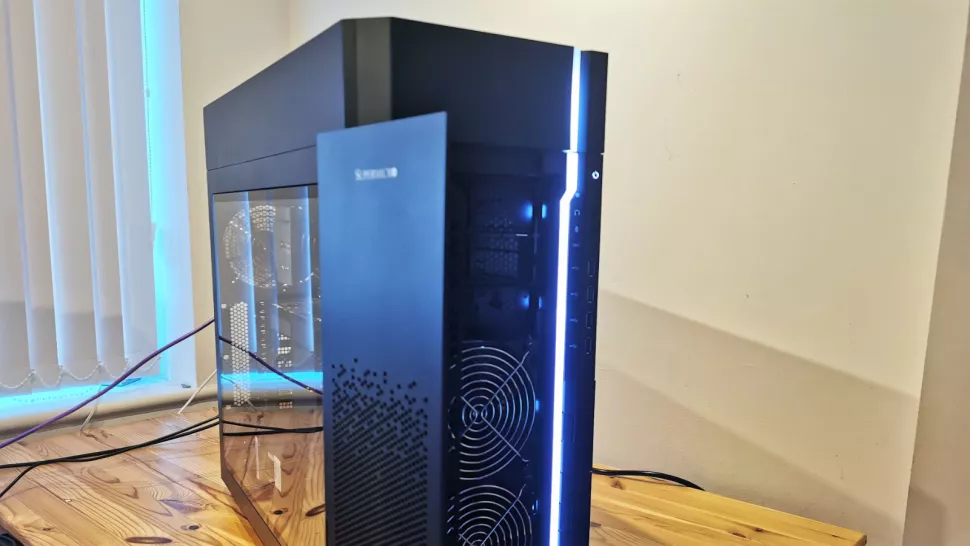 If you must ask, you probably can’t sign this purchase order off.

A system with the specification of the review system is in the order of £9,500 or $12,785 since the video card alone costs a whopping £2,500 MSRP if you could find one to buy at anywhere near that theoretical price.

When you factor in the heavy-duty case, workstation-class motherboard, monstrous processor, and the considerable amount of RAM that Boston pre-installed, the only surprise is that it doesn’t cost even more. 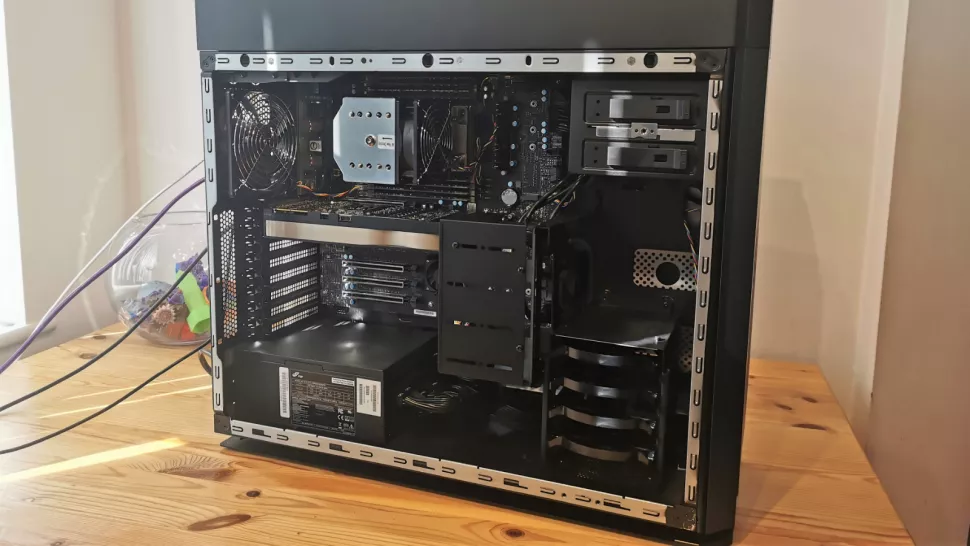 While Workstation-class systems aren’t usually renowned for their visual appeal, this system is rather elegant if you like neo-brutalist pillars of sheet metal, precision moulded plastic and acrylic.

To provide the space needed for the potential parts that could be mounted inside, Supermicro made a huge E-ATX specification enclosure that needs two people to safely handle.

Realising that the system inside could be very heavy, Supermicro put a large and robust carry handle on the top front but omitted to put equally strong support at the rear.

They did provide a recess to put fingers, but another bar would have been preferable.

Our only other reservation about the case is that there isn’t room for a second fail-over PSU if you be paranoid about those types of failures.

What can fit inside is the Supermicro Super M12SWA-TF E-ATX motherboard, a 2000w PSU, a full-length Nvidia Ampere-class video card, up to sixteen modules of DDR4 ECC memory, and six PCIe 4.0 x16 slots.

Powered by a 32-core 64-thread CPU, this voluminous enclosure has space for dozens of drives and whatever hardware you choose to install in it.

A large acrylic side panel allows a clear view of the internals, but without a lighting kit, the inside is a dimly lit space with only a couple of green LEDs on the motherboard to indicate that the system is running.

The front panel of the case is more informative, with a bright white LED accent that continues along the top, combining with an illuminated power button.

More internal lighting might have been a good idea, even if Supermicro is probably not keen on making this system look remotely like a gaming rig. 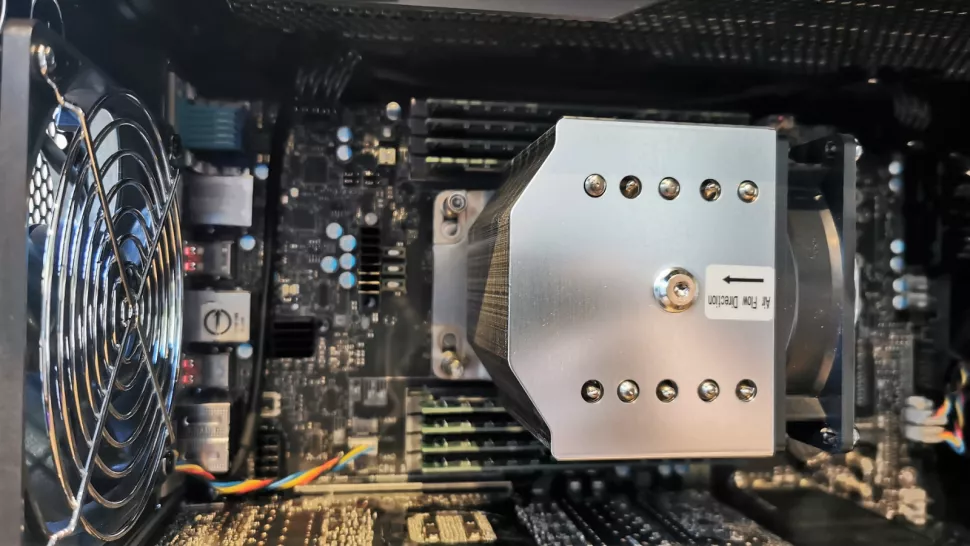 Removing the clear side panel gives ample access to the internals that makes adding or removing hardware remarkably straightforward.

The other side can also be removed for those that wish to run cabling or mount SATA SSDs out of view.

This case and hardware combination is best described as built for purpose, and by implication, that job is to crunch numbers for long periods without becoming overheated.

To provide effective air exchange, Supermicro provides three 120mm fans pre-installed, two at the front and one at the rear. A further three can be roof-mounted if required (not included), or you could use this space to install a water-cooling radiator and fan combination.

Let’s leave the rather mundane aspects of this design and dive into the hardware. And, be warned, you will need to buckle up now and put your seat tray in an upright position.

Intel has many fans, but let’s admit that sticking with a 14nm fabrication process for the best part of six years has been a major strategic mistake for them, born of the worst kind of hubris.

While Intel was on an extended development vacation, its nerdy competitor AMD was working overtime and developing its Zen architecture into something spectacular. The early chips showed promise but couldn’t compete with Intel on single-core performance, creating a false sense of security for the chip giant.

Eventually, inaction from Intel had consequences when AMD produced the Zen 2 architecture, moved to 7nm fabrication, and launched the latest Threadripper processors.

Suddenly, AMD had silicon that was as fast if not faster than Intel, and they consumed much less power, allowing them to scale in a way that Intel couldn’t match.

The embodiment of AMD's effort is at the heart of this machine, the AMD Ryzen Threadripper PRO 3975WX, a veritable chained Rancor of desktop processors. It features 32 cores, hyperthreaded to handle 64 threads, with a base clock of 3.5GHz, boosting to 4.2GHz and power consumption of 280W.

With 2MB of L1 cache, 16MB of L2 and 128MB of L3, this CPU can take even the most demanding multi-threaded computation and tear it into little pieces.

That makes it perfect for any heavy-duty processing, like CPU-based rendering or stress analysis, or fluid dynamics. And, if that’s not enough, AMD does make the gargantuan 3995WX with 64 cores and a 128-thread capability. 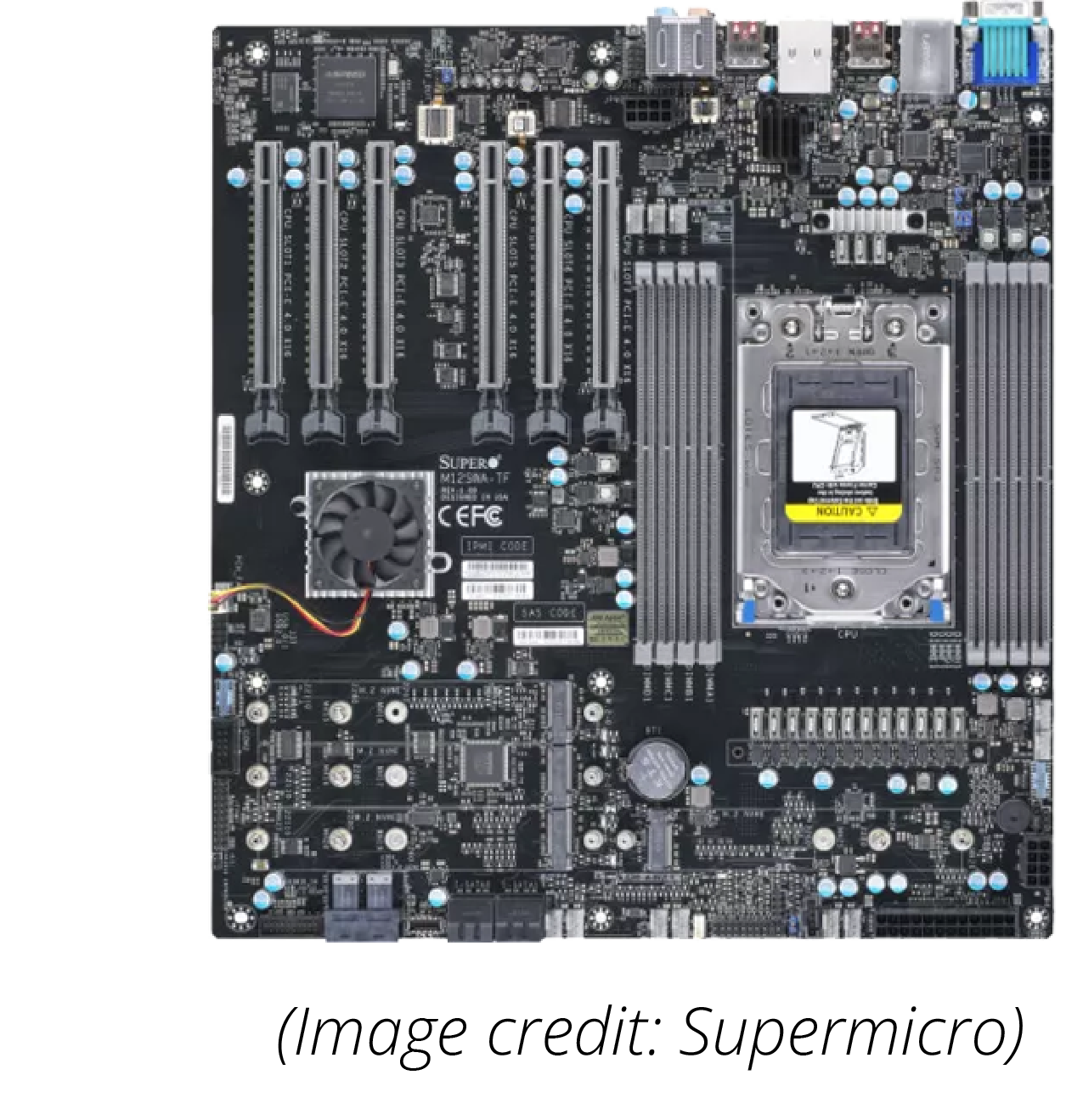 Some of these tasks can be accelerated even more using a computational GPU, and again this Workstation has that zone covered with the Nvidia RTX A5000. This GPU is a workstation tweaked Ampere GA102-875 core, sporting 24GB of 384-bit connected GDDR6 memory, 8,192 CUDA cores, and 867.9 GFLOPS of double-precision power.

Technically, it has slightly fewer cores than the gaming RTX 3090, and Nvidia has the A6000 model with double the installed memory and 10,752 CUDA cores. But, by any standards, this is a potent graphics card that has few equals or betters.

Installed on the review machine was 256GB of ECC DDR4 3200-MHz SDRAM in eight slots, with the potential to be boosted to 2TB on this design.

Everything about this computer is fast, and on occasion, a bit overwhelming.

But we’ll discuss just how quick it is later, so what is it like as a general computer?

Good, but there are a few wrinkles that any potential buyer might need to consider.

The Supermicro Super M12SWA-TF E-ATX motherboard has some great features, like more USB 3.2 Gen2 ports than we’ve ever seen before, and dual-LAN with 10GbE on one port and BMC/IPMI for remote monitoring and management.

It’s also one of the few boards we’ve seen with USB 3.2 Gen 2x2, allowing for 20Gbits of bandwidth on USB connected hardware.

However, where AMD dropped the ball on the WRX80 is that it doesn’t have Thunderbolt technology. For those that want local backups and extended storage, that feature would have been handy. It is possible to get roughly the same performance level out of the USB 3.2 Gen 2x2, but there are relatively few external storage devices that support that standard. Alternatively, 10GbE LAN can be used to connect a 10GbE NAS directly to the machine, but Thunderbolt would have been a more elegant option.

Unfortunately, this isn’t a feature you can add with a card, like hardware RAID.

Another mild weakness detected in our assessment was that this system came with two PCIe 3.0 M.2 drives installed, and the slots on this board support PCIe 4.0 modules.

We asked Boston about this, and they told us that when the system was constructed, no PCIe 4.0 drives had been certified for this board. That’s since changed, and current workstations can be specified with PCIe 4.0 drives.

Those that prefer water over the air cooling supplied in the review machine will also discover that Boston can supply that option. 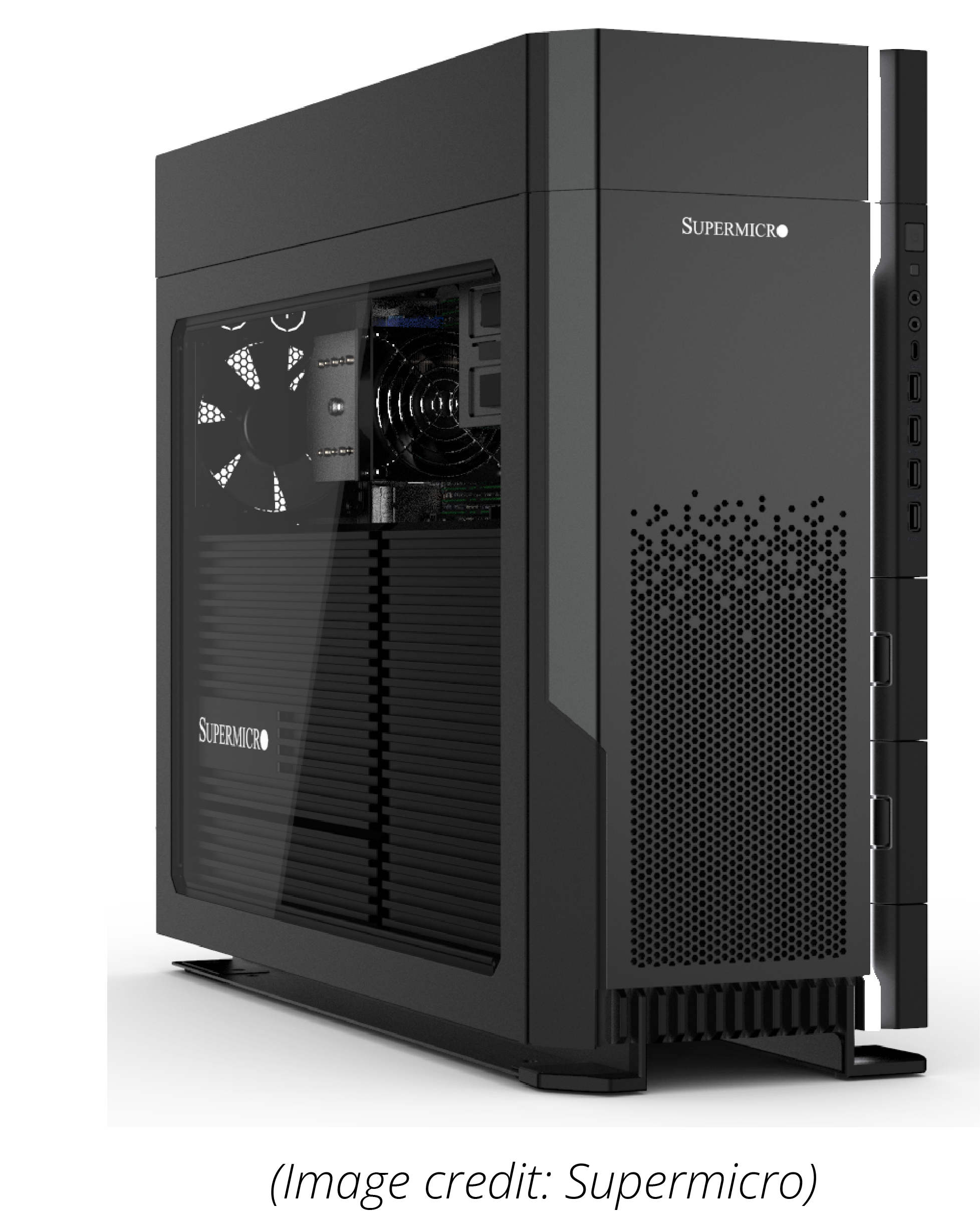 It’s g-force inducingly fast. Shall we just leave it at that?

Where this machine differs from a typical high-performance PC is that most of the time, it keeps its true power relatively well hidden. When navigating the interface, opening applications or performing daily computing jobs, tasks are completed as briskly as you might expect.

The irony of those comments is that to breeze through most typical PC jobs, a very small percentage of the CPU or GPU power in this rig is required.

To better explore the true power under the surface, we deployed a few benchmarks that we don’t normally include designed to push these components to their limits.

The Blender benchmark suite can test CPU and GPU, isolated or in combination with its 3D rendering missions. Blender is exactly the sort of software that can use the power in this system, and the numbers here might be useful for those with an existing system that want to know how this Nvidia RTX A5000 and Threadripper 3975WX tag-team compares.

Another useful benchmark that we normally run is Cinebench R23, and here the number of cores and threads delivers amazing scores for multi-core performance.

We’ve included a good number of 3DMark tests, but with more CUDA cores, the retail RTX 3090 is faster than the A5000 in most of those tests. For a customer involved in game development, the retail RTX video cards are probably better suited. However, for CAD, simulations, and scientific processing, the A5000 is undoubtedly the better option.

In short, unless you are prepared to spend even more on the 3995WX and A6000, there isn’t much that is more powerful for running multi-threaded applications, especially those that exploit CUDA, DirectCompute or OpenCL. 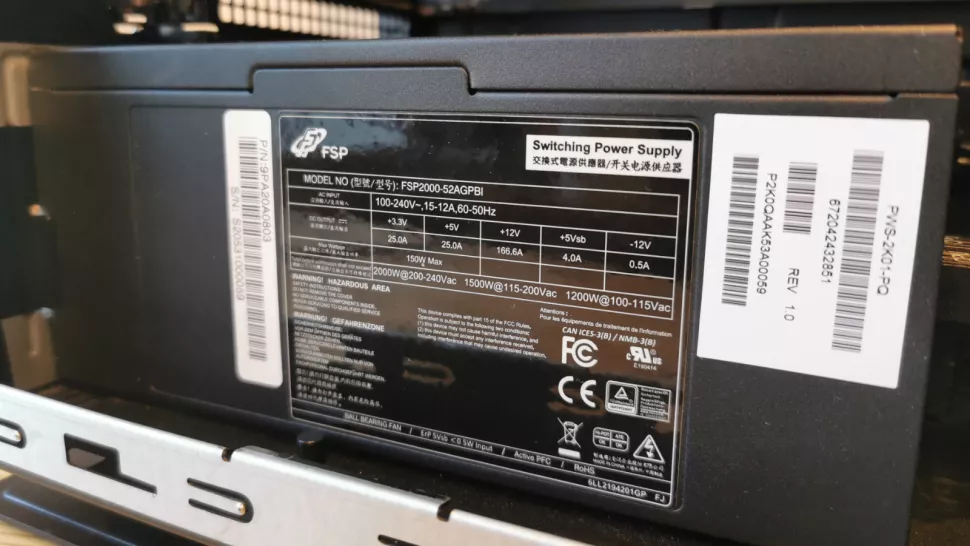 Some might be reading this and wondering what role Boston Limited plays in this system, given that the platform is one built mainly by Supermicro for them.

Supermicro makes the AS-5014A-TT Workstation hardware, including the enclosure, motherboard, cooler, etc. You can purchase that equipment directly and source the other components elsewhere.

However, what Boston Limited offers is to source all the best parts to flesh this system out, assemble and test the platform, and if you want it, provide a support service that can get you up and running smartly, should the worst happen.

Some system builders can throw computers together based on the specific part deals they can get at a specific time, but Boston Limited is about delivering a balanced and reliable platform that the customer will enjoy and hopefully come back for more.

We should also mention that some parts, most notably the A5000 video card are almost impossible to get in retail at this time, so sourcing that one part might prove very challenging for those that aren’t already system builders.

The Supermicro AS-5014A-TT Workstation isn’t perfect, but it is as close to optimal as most workstation designs come. It might be big, heavy and occupies two IT people to move it around, but when you need extreme performance, it delivers.

It’s also got extensive expansion possibilities if the requirement is for multiple GPUs, fibre connected storage, or specialist development environments.

All this power and flexibility costs plenty, but you won’t get this authentic workstation experience spending less in this era of chip and GPU shortages.