AMD recently announced and launched 3 new CPU’s for its 2nd Gen AMD EPYC portfolio. These new CPU’s inherit the characteristics of the existing EPYC 7002 series line up and use the balanced and efficient architecture of Zen 2 cores, however they also have a specific focus; high core frequency. AMD say these CPU’s are targeting market sectors that have workloads that include databases, high performance computing and hyperconverged hyperscale infrastructure.

Boston have previously written our launch blog on this product release which goes into more detail, so if you’ve not yet done so, please click here to read and catch up on the latest information.

Today however we will be focusing more on the technical side and putting one of the new CPU’s through its paces with a series of benchmarks.

These new CPU’s stand out from the rest with a new convention which includes 7F in the part code. 7 denotes the series of processor and F stands for Frequency and denotes the higher speed of these cores.

Of these 3 new SKU’s the main distinguishing feature is the core count. The 7F32 has 8 cores, the 7F52 has 16 and the 7F72 has the most with 24 cores per CPU. It’s a pretty typical variation in cores but one thing to note is that as the core count increases the clock speeds decrease. This is due to increased core density and AMD need to keep thermals in check to guarantee these numbers.

A summary table for all SKU’s including the base and turbo frequency is below.

For this blog we will be testing the 7F52 and comparing to similar enterprise grade server CPU’s. AMD refer to the clock boost as Max Boost Clock and in the 7F52 this ramps up to 3.9GHz. It will be interesting to see where the faster clock speeds make a difference in various workloads.

In our Boston Labs we have set up the Boston Fenway 2264-0T dual CPU socket server with 512GB 3200MHz DDR4 memory and Windows Server 2019. Alongside the 2x 7F52’s in the AS-1123US-TR4, we have a few CPU SKU’s to compare it with from our previous dual socket benchmark tests, the details of which are in the below table. 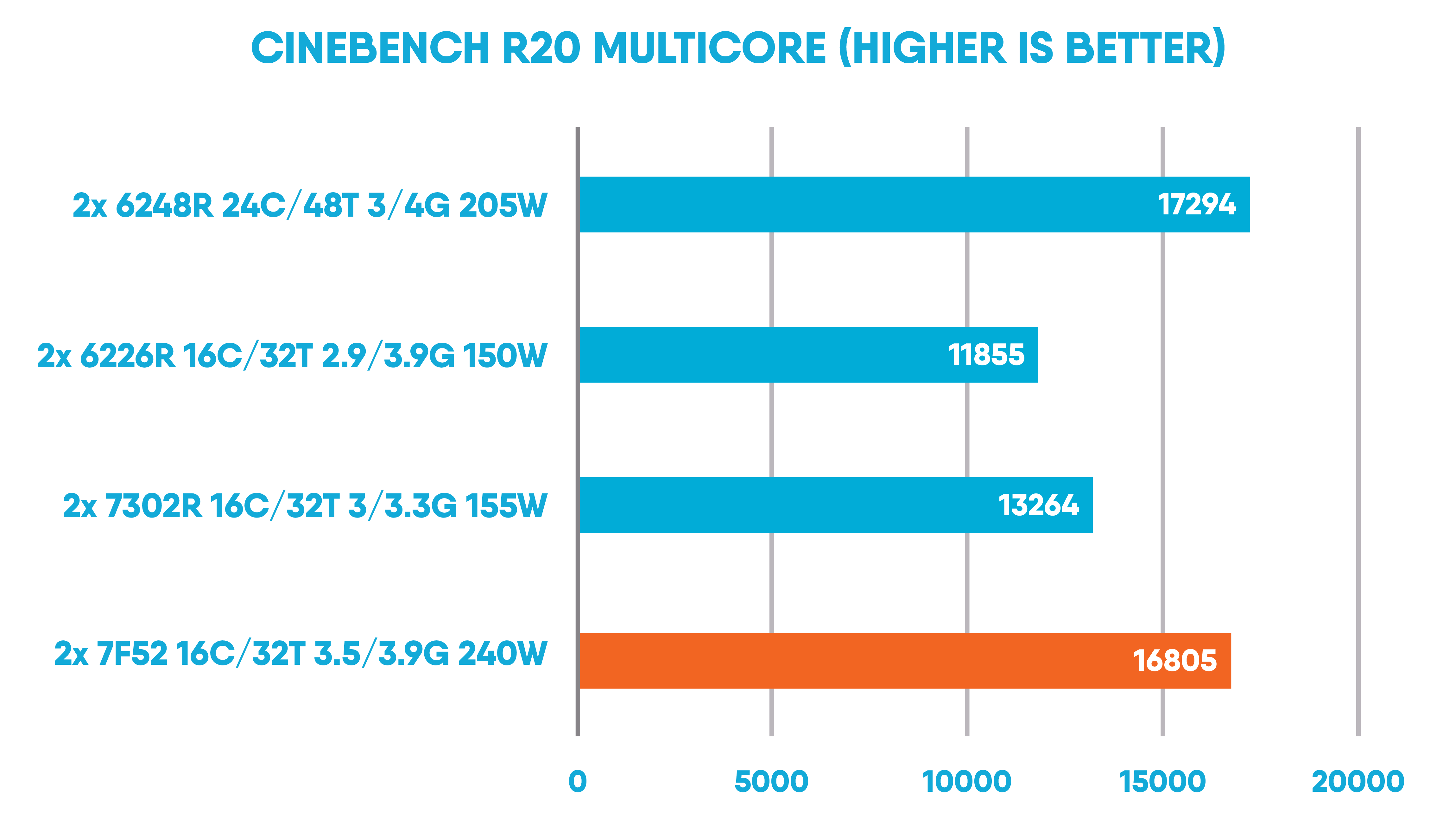 Starting with Cinebench’s R20 multicore test we can see the 7F52 performs very well. The 2 similar core count CPU’s lag behind somewhat. In the case of the 6226R the Intel turbo is 3.9GHz just like the 7F52 but this actually only applies to 2 cores. So, when running certain workloads the CPU’s 16 cores wont all be running at 3.9GHz. In fact, on a Non-AVX workload the max all 16 cores will run at is 3.6GHz, and on an AVX 2.0 workload this drops to 3.1GHz. The 7F52 however will try to run all 16 cores at the full 3.9GHz assuming power and cooling allow. For Cinebench I observed he behaviour whilst running the benchmark several times. The 6226R’s 16 cores would generally run at the expected 3.1GHz speed as Cinebench seemed to be using AVX 2.0 for this test. When running the same on the 7F52 I can see al of the cores maintaining their 3.9GHz clock speed. 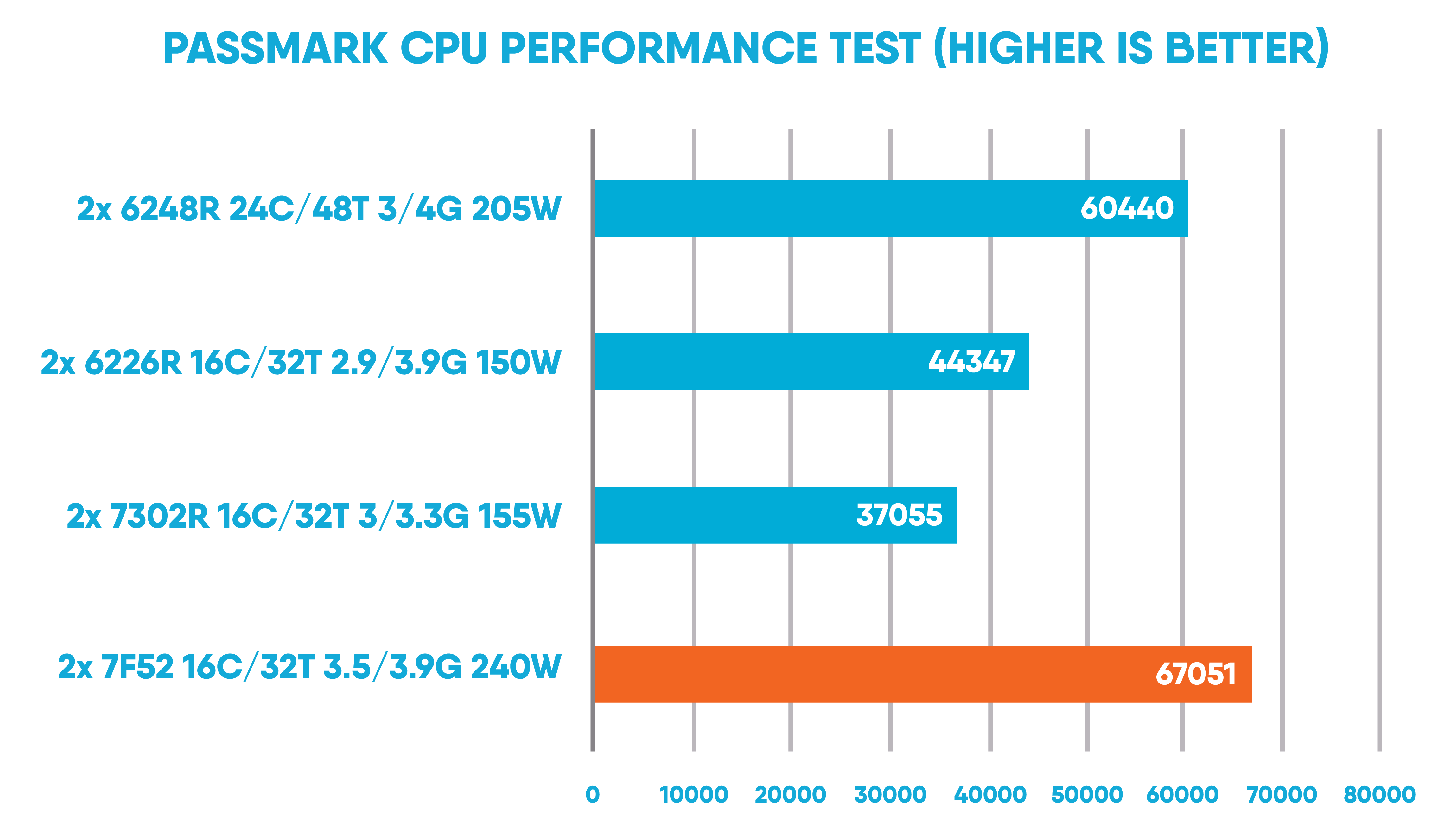 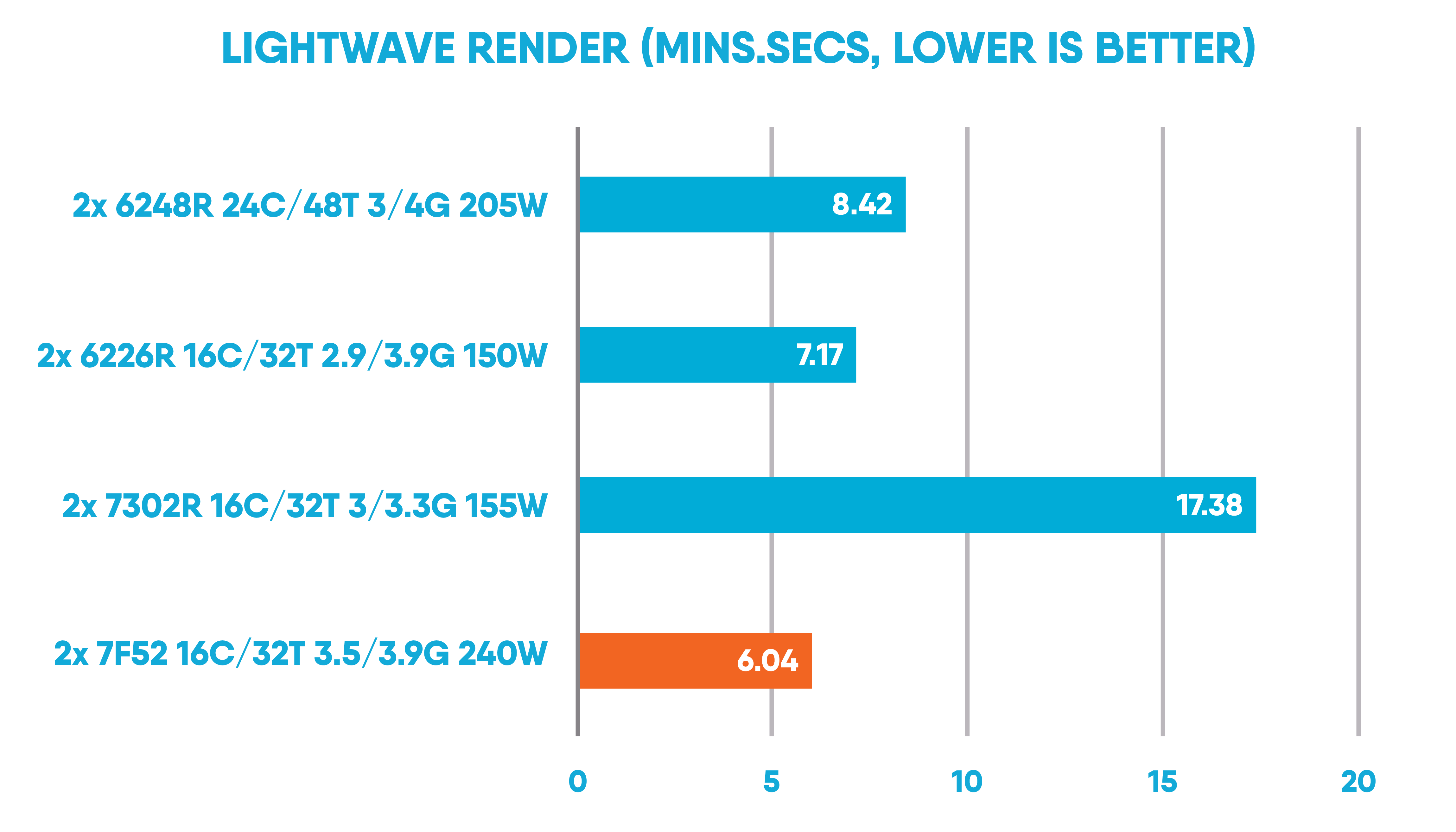 For the Lightwave benchmark we render a scene and record the time taken to complete the task. Again, the 7F52 edges ahead.

(Note - The 7302 failed to produce a correct score so is on our list to retest in the near future.) 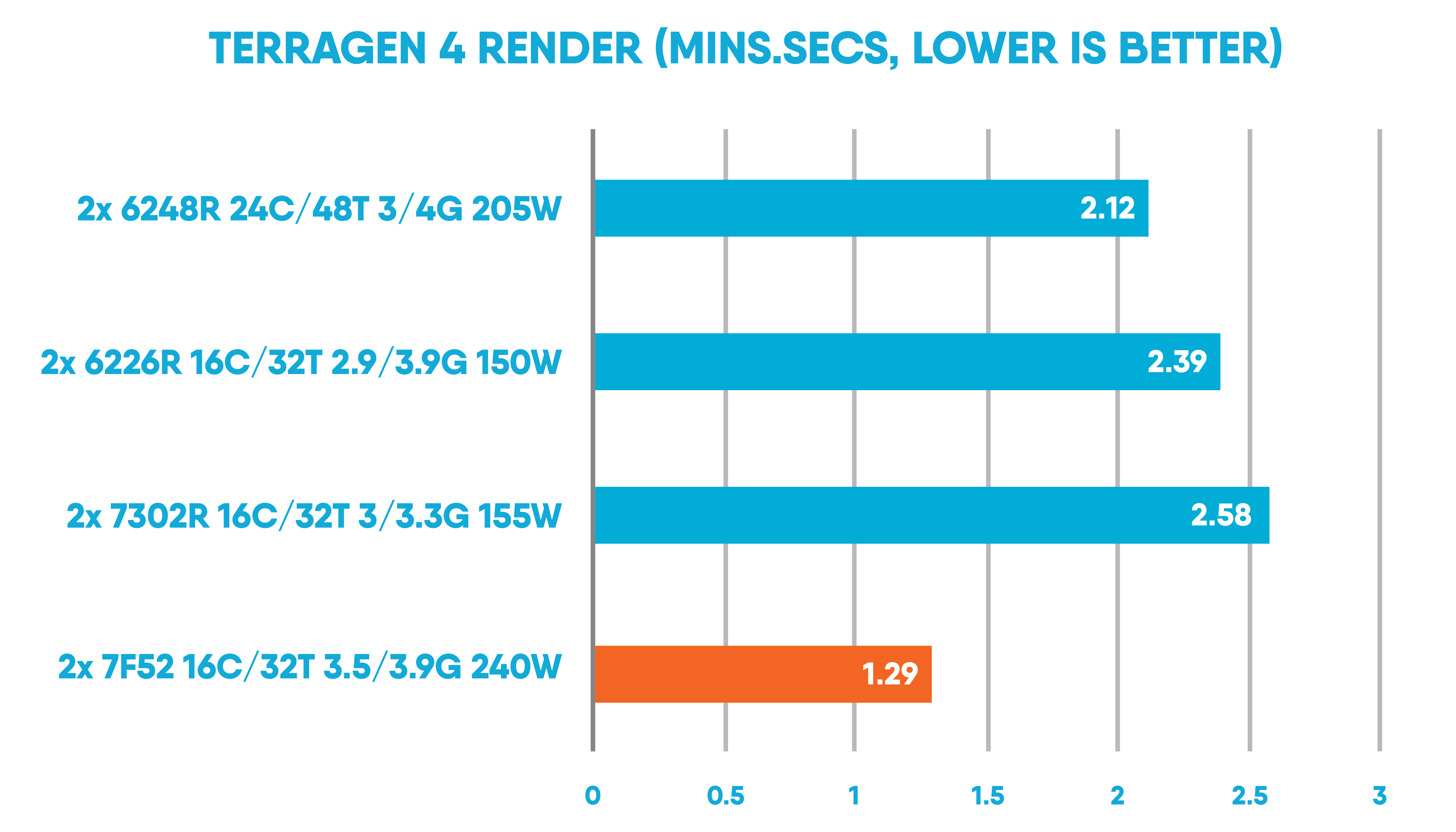 Terragen is also a rendering test and AMD’s new CPU again provides the fastest time. It looks to us that the consistent Max Boost Clock gives this CPU a real edge when compared to CPU’s even with higher core counts. 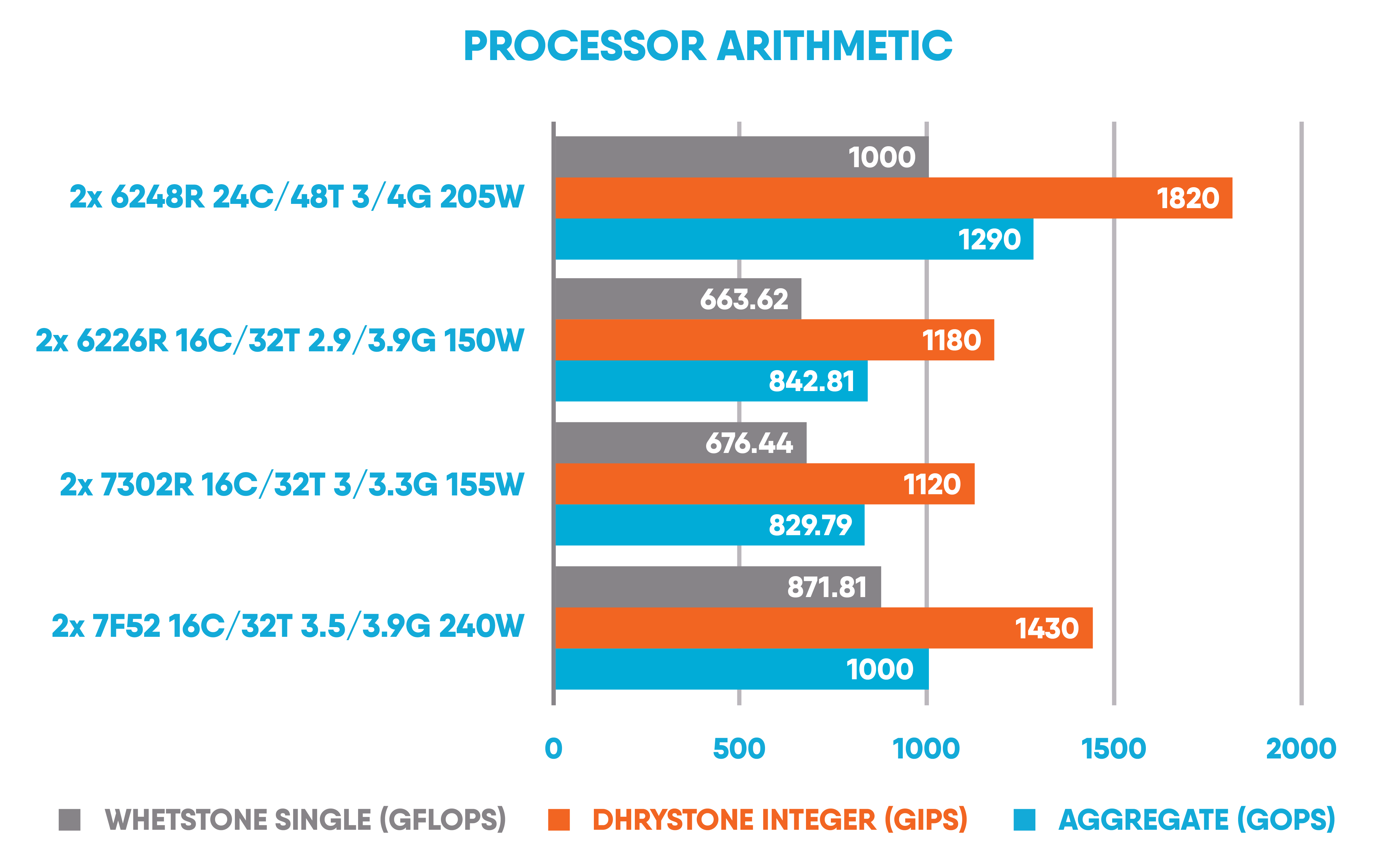 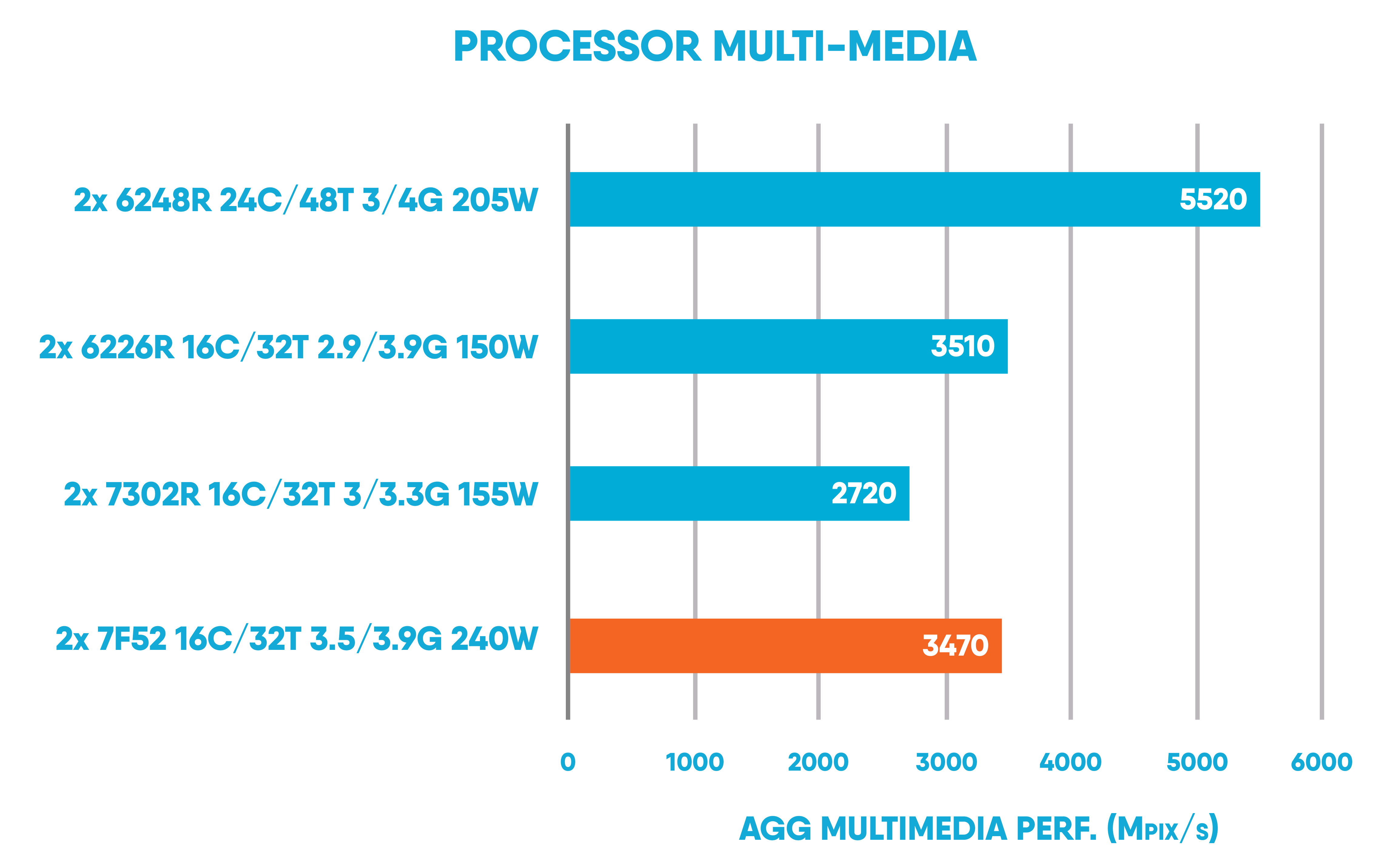 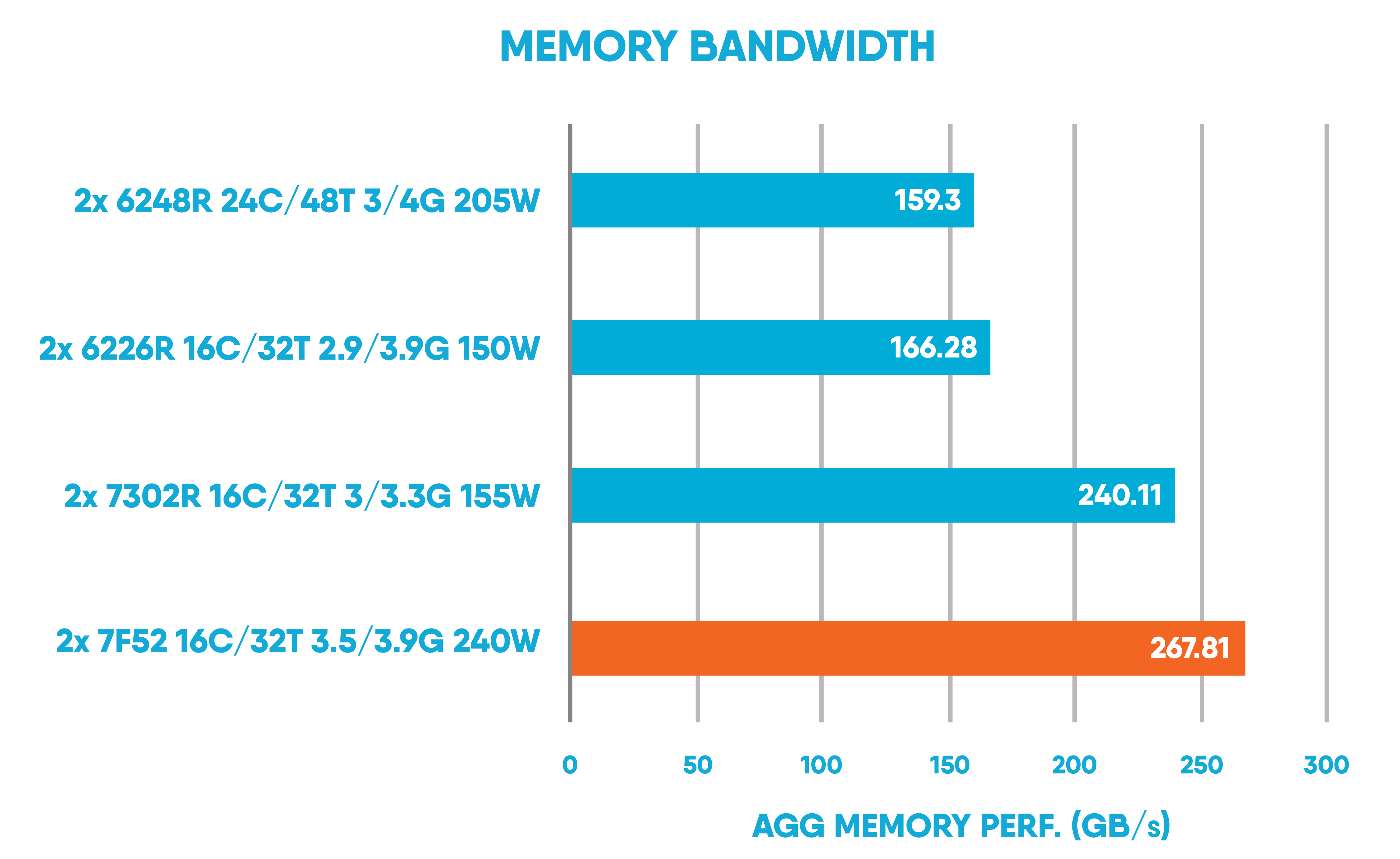 Sisoftware’s Sandra benchmarks are where the 7F52 is generally not the top performing CPU in our roundup. Both the arithmetic and multimedia tests are multithreaded in nature and therefore higher core CPU’s make a difference here. The multicore efficiency shows a faster data path between the cores and CPU’s in the new 7F52 vs the others, although the latency is a tad higher. Finally, in the memory bandwidth tests we see both AMD CPU’s outperform the Intel SKU’s in our results and is certainly something to consider for those applications

With these new CPU SKU’s AMD has provided an interesting option for server workloads that favour a balance of cores but more emphasis on clock speed. From our results we can see the clock speed making a difference in render tests and general CPU workloads such as Passmark. The Max Boost Clock boost typically staying locked at the advertised 3.9GHz has really given the 7F52 an edge over the competition.

Looking at it from another angle, these CPU’s draw much more power that the others we tested, so the performance per watt may paint a different picture. The 7F52 is a 240W power hungry CPU, so where power consumption is important this may weigh into the decision to populate and scale out servers with these CPU’s in data centre.

Overall, we were pretty impressed with the 7F52, in particular the Max Boost Clock speed. We look forward to seeing what comes next from both AMD and Intel.

For any enquiries and remote testing opportunities on these and other platforms, please contact us for more details. We can tailor bespoke systems so you can run specific workloads remotely in our Boston Lab facility.

If you’d like to learn more about Boston’s range of AMD EPYC systems, such as the  Fenway 2264-0T you can visit our product pages here.