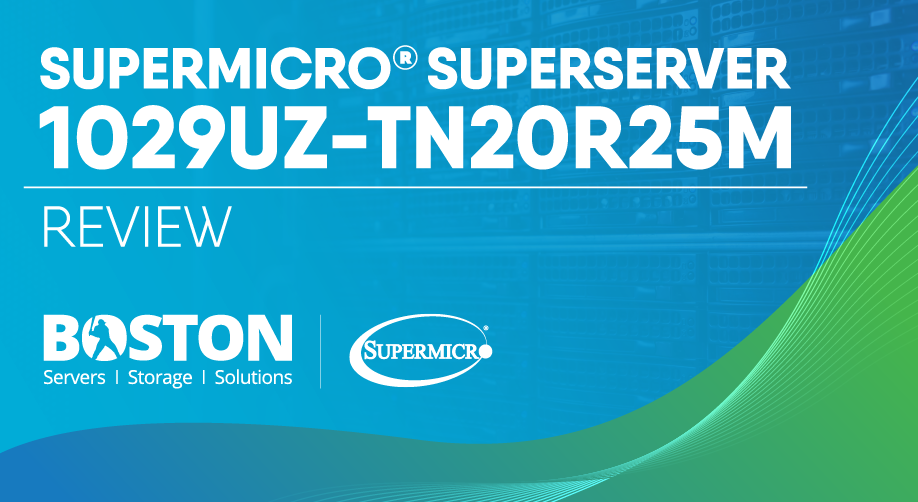 The Supermicro SuperServer 1029UZ-TN20R25M is a 1U, dual socket that supports the second-generation Intel Xeon Scalable processors (Cascade Lake/Skylake (LGA 3647). Unlike many other 1U and even 2U servers on the market this system capitalizing on the benefits of Cascade/Skylake with up to 6 TB’s of ECC registered memory and support for Intel Optane DC PMM (Permanent Memory Modules) and in the default configuration supports 20 2.5” hot swappable NVMe drives and no that isn’t a typo and while they were at it Supermicro have thrown in Mellanox dual 25 Gb ethernet. The SuperServer 1029UZ-TN20R25M is recommended for virtualization, cloud computing, high density enterprise servers and software defined storage. This is a powerful, densely populated system with amazing low storage latency and high IOP’s and bandwidth.

The number one selling point of this system is NVMe density, there isn’t another 1U server on the market with support for 20 2.5” NVMe drives period and this is without the use of PCI-E switches! All the 20 drives are directly attached to the system, no multiplexing means unprecedented IOP’s and bandwidth and with super low latency. Many rival systems use PCI-E switches which create a PCI bottleneck within the system strangling performance, not with the SuperServer 1029UZ-TN20R25M.

For ease of installation and maintenance the Supermicro SuperServer 1029UZ-TN20R25M has all 20 drive bays ejecting forward, all of which are hot swappable. Many rival systems on the market use internal or rear ejecting drive bays to attempt (unsuccessfully I might add) to reach a similar capacity. Supermicro have achieved this by making the drive bays and caddy’s as small as possible. Only 7mm high! While at the same time having a tool-less easy to use mechanism which still includes standard features like the drive bay ejection lock.

The engineering geniuses at Supermicro have really outdone themselves with the SuperServer 1029UZ-TN20R25M by cramming in as many components in the space available. There isn’t an inch wasted. Not only does the system come with dual 2nd generation Intel Xeon scalable processors but it also has 24 memory slots, dual 25 Gb ethernet (SFP28) and it’s not just any old 25 Gbe, it’s Mellanox 25 Gbe and this is via one of the risers so you don’t even lose an expansion slot, dual (as you would expect) 1600W 80 Plus Titanium power supplies, 20 7mm hot swappable drive bays and support for either a M.2 PCI-E M-Key NVMe or SATA3 (2240/2260/2280/22110) drive and still after populating a system this densely there are still 2 PCI-E x8 slots (FH, FL) available for further expansion. This system ships with 2 PCI-E HBA (Host Bus Adapters) providing the interface for 6 of the 20 NVMe drives. The remaining 14 connect to the system directly to the motherboard or via 2 of the risers.

You might be thinking this system is densely populated with components that can put out a lot of heat and again the Supermicro engineers have outdone themselves, the airflow in the SuperServer 1029UZ-TN20R25M is sensational, the 8 14,400 RPM 40mm x 56mm counter rotating fans mounting directly behind the drive bays not only keep the drives cool but create enough airflow to cool the entire system.

This is sold as a ‘complete system only’ or CSO in Supermicro speak. This standardised approach simplifies support and standardises and streamlines production further keeping down costs. Examples of this streamlined approach is the backplane that ships with the system supports 20 drives as standard (4 of which can also support SAS/SATA if required) and the dual SFP28 25 Gb ethernet ports.

As with all Supermicro systems out of band management is provided by IPMI powered by the excellent ASPEED AST2500 BMC providing all the features you would expect to see as standard, e.g. configuration via a web interface, monitoring and a Java/HTML KVM. There is also a RJ45 for the management interface.

The 1U Supermicro SuperServer 1029UZ-TN20R25M is easily the highest density NVMe platform on the market today. It allows the utilization of all the PCI-E lanes of 2 2nd gen Intel Xeon scalable processors allowing the direct attachment of 20 NVMe drives (without the use of PCI-E switches) which provide staggering and unmatched IOP’s and bandwidth and the super low latency that comes with directly attached NVMe. While at the same time the SuperServer 1029UZ-TN20R25M has more than enough CPU, memory and networking capacity (and let’s not forget expansion) to support large and varied workloads from virtualization, cloud computing, high density enterprise server and software defined storage.

Our annual HPC Roadshow is back! Join us on June 28th & 29th for an exciting event full of talks from our partners such as Supermicro, AMD, NVIDIA and Intel...