A Reference Guide To Network Cables 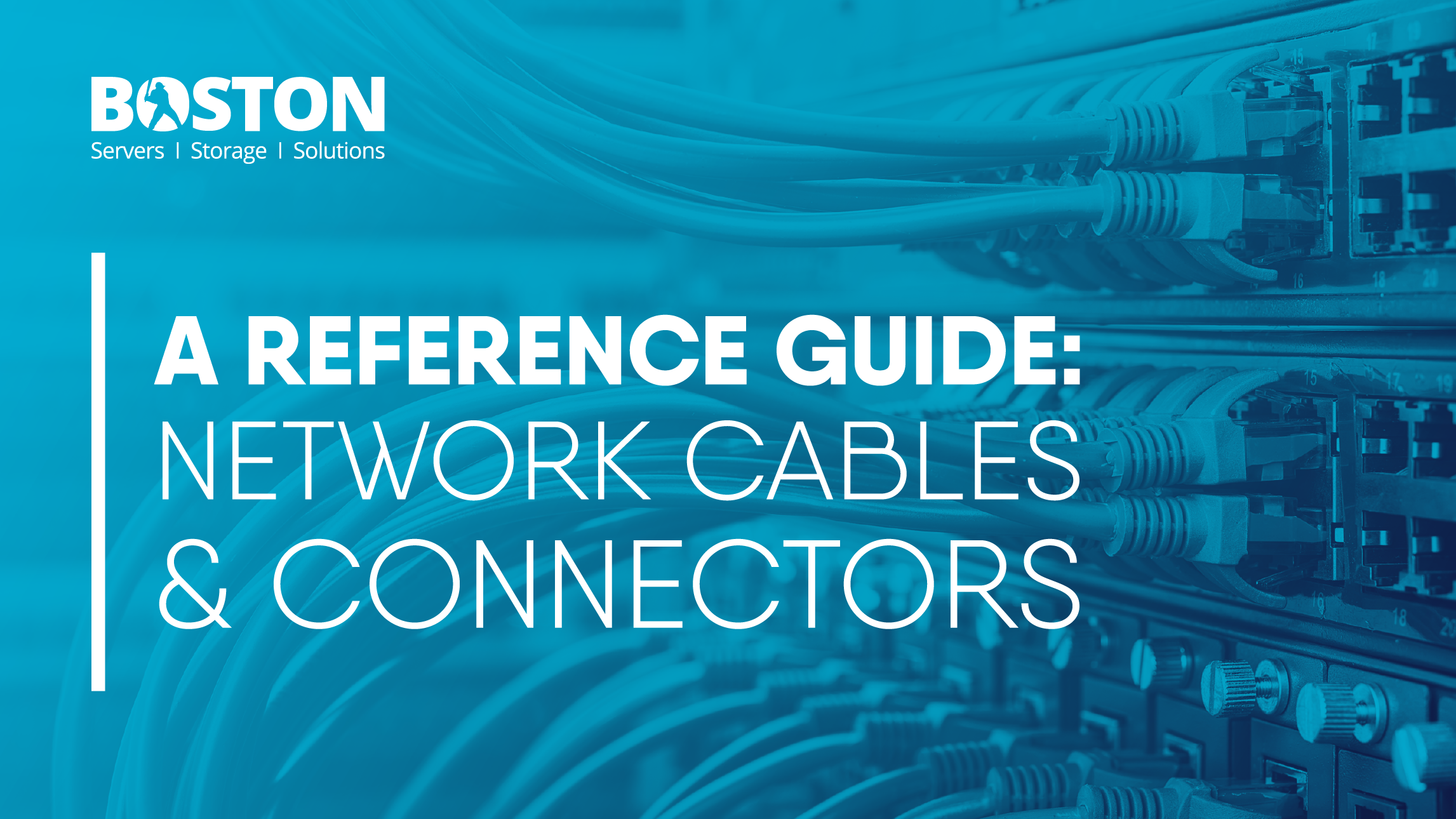 When it comes to Ethernet connections, there are many different types of cables, connectors and speed grades which can make choosing a cable a daunting process for the uninitiated. The exact part which might be selected can depend on the physical connector, throughput, the distance the data needs to travel and also the cost.

This guide aims to explain the types of connector and cables available in the market and to help you choose the correct devices for your network design.

The most common and the cheapest type of network controller and cable used is a 1Gb Ethernet cable (Cat5/e or Cat6) with an RJ45 connector on each end. This cable, when paired with a 1GbE controller is good for transfer rates up to 125MB/s and can cover a distance of around 100 metres as standard. 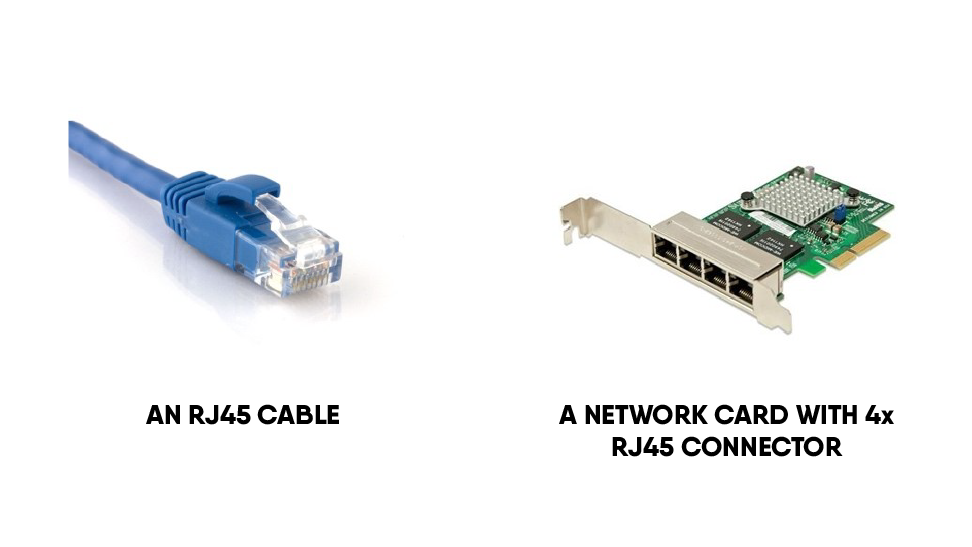 Some network adaptors and switches can also support 10Gb Ethernet speed which increases throughput 10-fold to 1250MB/s. Cables which support 10Gb over copper and RJ45 are commonly referred to as 10G-BaseT. In order to support this higher speed, there are limitations on the grade of cable and the distance which can, in turn, be covered which follow below

These cables are typically quite low cost and are available from a wide range of stockists including Boston Ltd. Due to their universal appeal in both consumer and commercial applications, you may find them commonly on the high street too.

Small form factor pluggable or SFP for short is a highly widely adopted standard for network connectors from 1Gb to 25Gb links used in commercial, datacentre and enterprise applications. It has a number of standards which in turn define the speed, distance and type of cable which can be used to transmit data. The SFP standards also allow the flexibility for transceivers to be used for transmission of data via fibre or if fibre isn’t necessary, to transmit the signal over standard copper cables to reduce cost and complexity.

Fibre cabling tends to be used where distances need to exceed those which copper cabling can support, or where higher data rates are necessary. Fibre cables consist of fibre optic cores which transmit light signals over long distances, as opposed to the electrical signals which are sent along copper cabling. In order to achieve this, it is common to require two parts.

For 1Gb links, there are 2 main types of fibre optic cable and transceiver which are used - SX and LX.

The fibre cables used for 10 Gigabit network connections are the same type as used to carry 1Gb network traffic. The range of the cables is less however due to the 10 Gigabit speed in which the data is transferred.

The naming convention for 10Gb fibre cables is very similar to that of the 1Gb cables.

SMF or Single mode fibre cables have a small diametral core that allows only a single mode of light to propagate. This decreases the number of reflections as the light passes through the core and allows the signal to travel further.

MMF or Multimode fibre cables have a large diametral core that allows multiple modes of light to propagate. This increases the number of reflections created as the light passes through the core which in turn allows more data to be sent however the quality of the signal is reduced over long distances.

When paired with an appropriate transceiver, these fibres can transmit data at varying rates of data transport.

As a result, SMF fibre cables are used to cover longer distances but cost more than MMF. 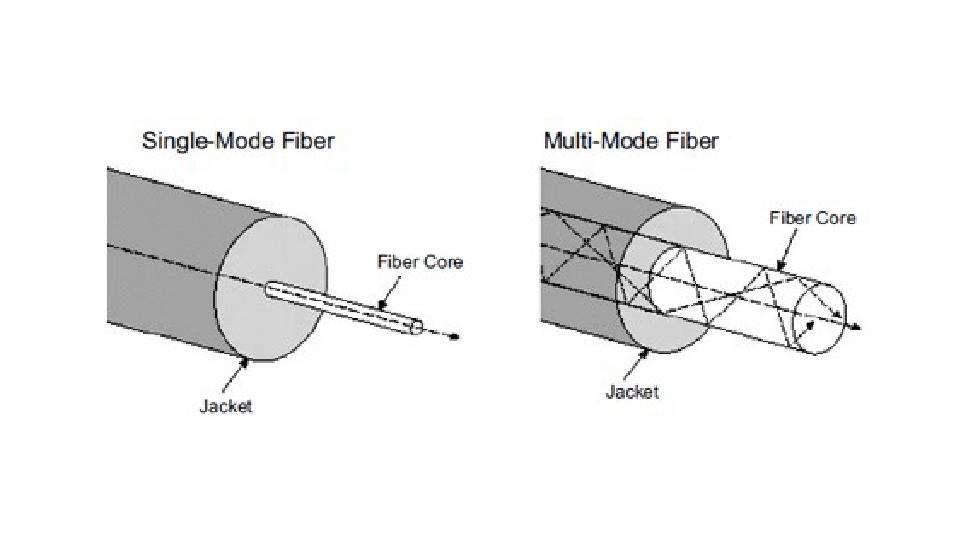 Both are in use in a variety of applications, but in simple terms, SC tends to be popular in telecoms and in some datacentre backbone networks, whereas LC is more commonly used between computers, servers and switches.

Duplex simply means that there are two fibres per connector, allowing for data to be sent and received through different fibres simultaneously. Conversely, simplex fibres offer only 1 fibre per link and transmit and receive over that simultaneously.

As briefly explained above, transceivers (or GBIC – GigaBit Interface Connector) accept digital/electrical signals from devices and convert them into optical signals for transmission over fibre. 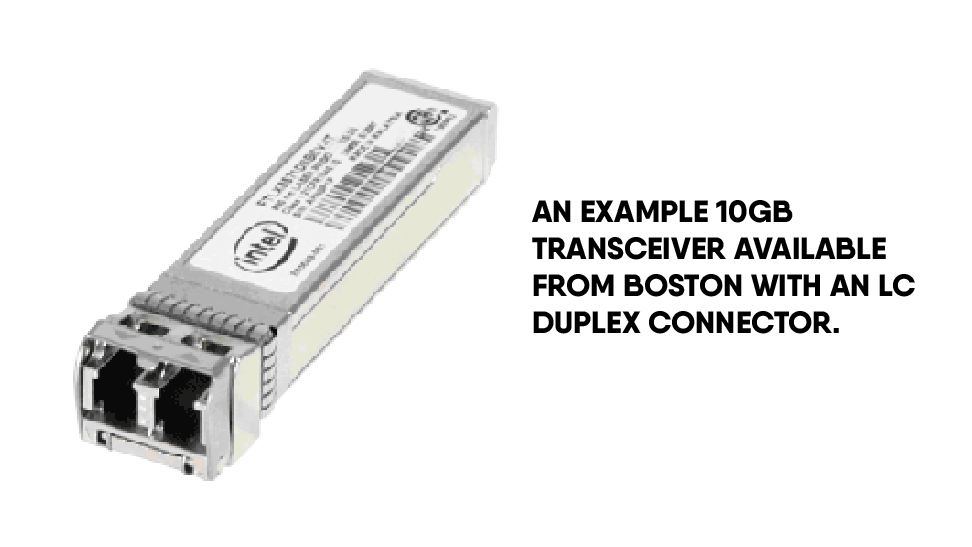 The most common connection for this type of transceiver is SFP (Small Form Factor Pluggable Transceiver) which enables 1Gb connectivity.

SFP+ transceivers are an enhanced version of the (SFP-GBIC) 1Gigabit transceiver but share the same physical form factor as SFP. These transceivers are capable of transmitting data at up to 16 Gigabits per second so are ideal for 10 Gigabit network connections. The SFP+ connector has become the most predominant Transceiver for 10Gigabit networks around the world as a result.

In most cases, SFP devices can be used in SFP+ compatible devices, however, the device with the slowest speed will limit transfer rates of the whole link. For example, a 10Gb controller with an SFP (1Gb) transceiver can only ever transfer data at 1Gb.

Again, an enhanced SFP connector with improved throughput, SFP28 enables speeds of up to 28Gb to be achieved with the appropriate transceiver and cabling, whilst still maintaining physical compatibility with SFP and SFP+. This makes it ideal for 25Gb links used in Ethernet networks.

SFP28 tends also to be compatible with SFP+ devices as a result and will operate at the lower 10Gb speed when combined. Downgrading speeds to the lower 1Gb of SFP are not generally recommended however, as device compatibility is often not supported.

Where an SFP/+/28 connector is present on a device, however, a fibre optic link is not necessary, it is typically possible to use a direct attached copper cable for short distances, typically between 1 and 7M without additional power, or even as far as 15M with actively powered cables.

These cables differ to the transceiver and fibre combination, in that there is only one part, combining the connector and cable together.

DAC cables tend to be lower in cost than the fibre/transceiver equivalent, and do not suffer from some of the issues which fibre cables do with fragility and bend radius issues. 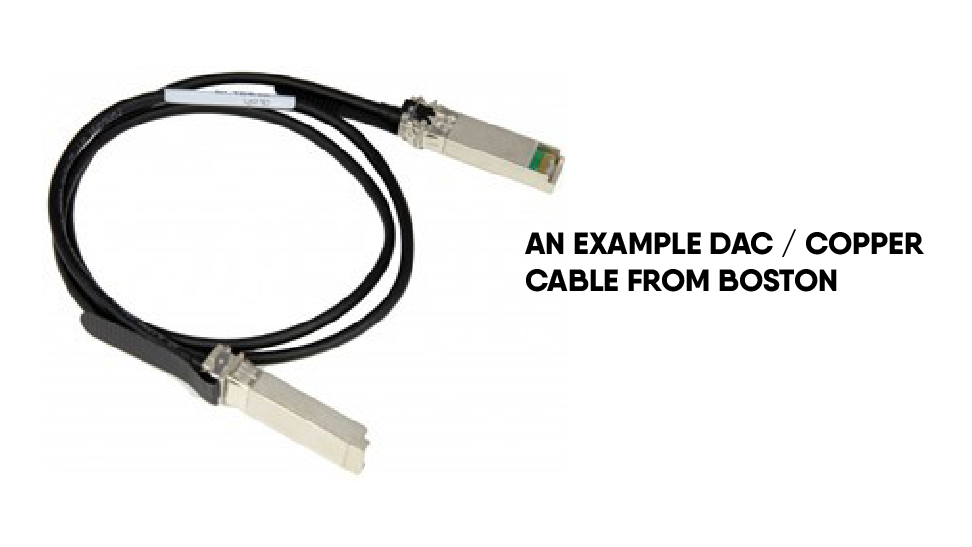 40Gb and greater speed networks commonly use QSFP+ or QSFP28 connectors, which is short for Quad SFP, and is literally what it appears to be. Four SFP+ links are combined to create a greater bandwidth for the link.

This configuration brings additional advantages too, in that in many cases a single 40, 56 or 100G link, can be split into 4 separate links with a quarter of the bandwidth. These split links, in turn, can be connected to 4 separate devices, creating a 1 to 4 relationship. This can be a great solution for enabling higher port counts on switches, whilst reducing cost and limiting cable count.

Note - The process of splitting ports does require full support and configuration of the switch device providing the Quad SFP+/28 port to divide it to multiple SFP+/28 ports. In some cases, there are limitations on licensing or the number of overall ports which can be generated from a single switch, so be sure to confirm your desired configuration can be supported. 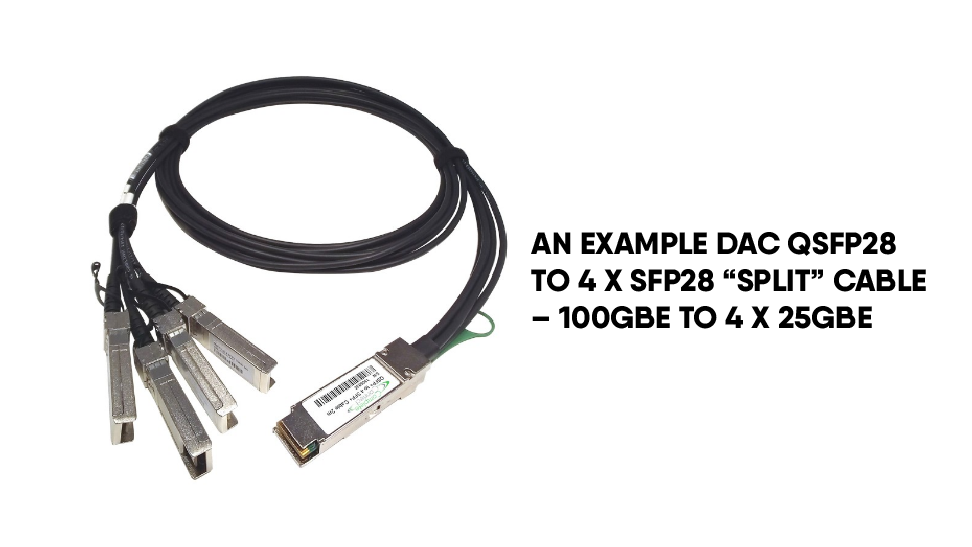 QSFP+ and QSFP28 connectors support both DAC and fibre optic/transceiver links as seen with SFP+/28 devices, however, the type of fibre and transceiver tends to have additional options over the LC which we introduced for 1, 10 and 25GbE.

Whilst LC connectors and fibre are still used with QSFP+/28 for long distance connections, for shorter distances MPO is a more cost-effective choice. MPO stands for “Multi-fibre Push On” and enables more than one fibre core to be delivered in a single connector, currently this is using as many as 24 fibres per connector for 100GbE in typical deployments today. Commonly, MPO uses an MTP® connector, which is exclusively developed by a U.S connector company named US Conec. 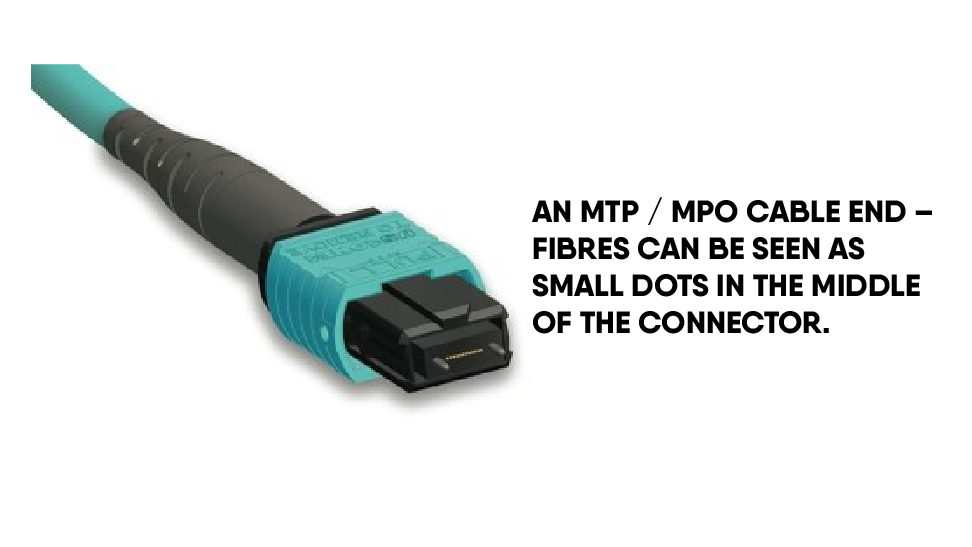 Since each standard has its own performance capabilities it is essential to pair the adaptor card or switch port with an appropriate transceiver and in turn fibre cable. Below is a table courtesy of Mellanox, our primary networking partner, detailing the various combinations which are typically available today, making selection simple. 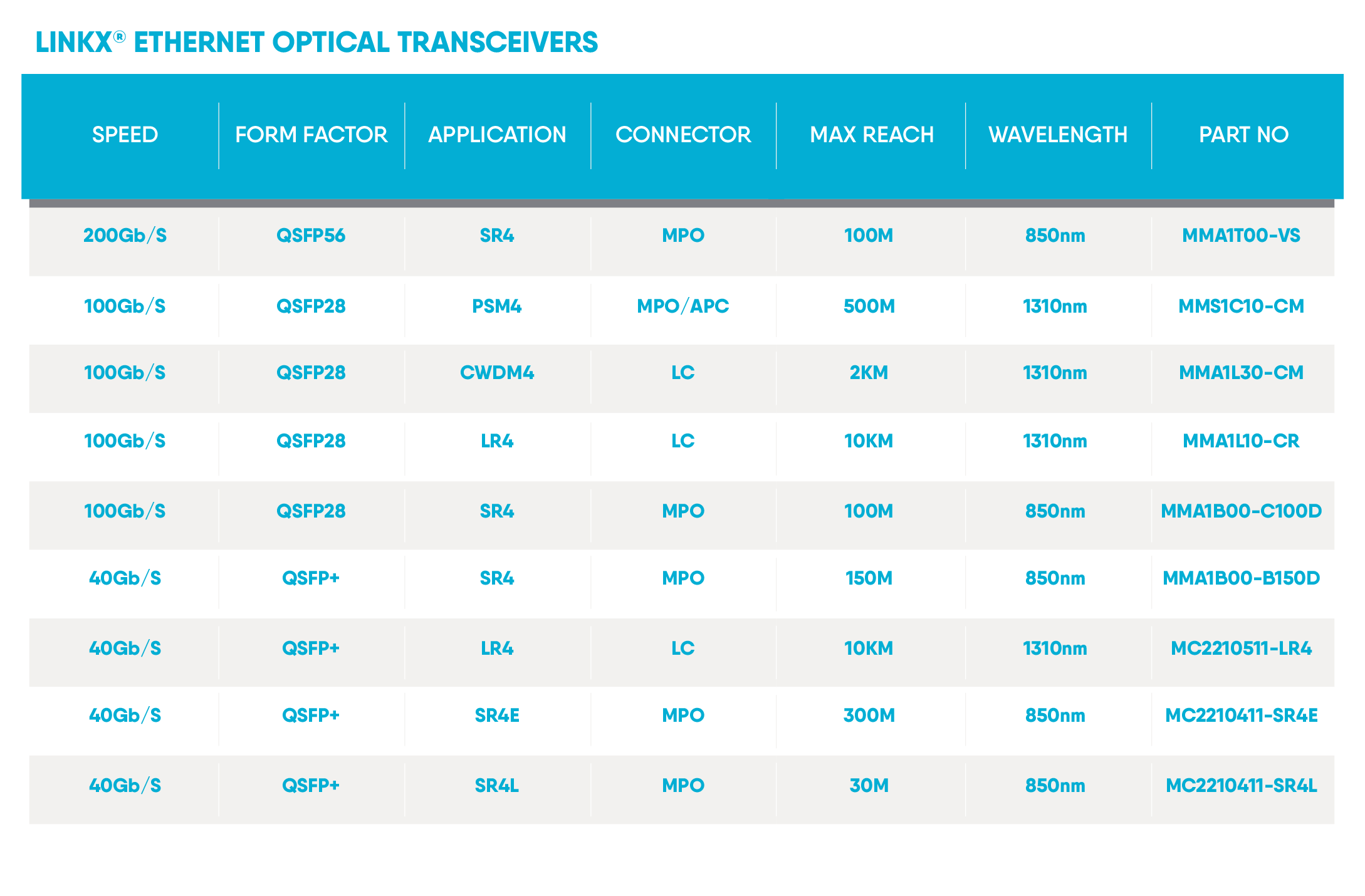 At Boston Ltd, we stock a wide variety of cables, transceivers, switches and ethernet adaptors from our close range of networking partners. Whether you are looking for a simple cable, or a complete network infrastructure design and implementation, we’re standing by to advise you.

Get in contact with the team or start by browsing our end to end networking portfolio here, we’re looking forward to helping you.